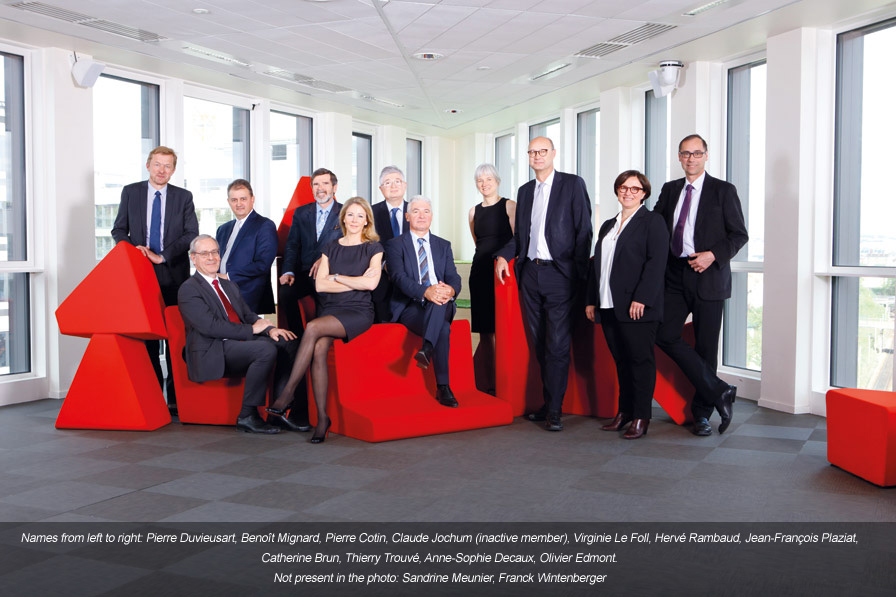 Composition of the Executive Committee chart

Thierry TROUVÉ has been GRTgaz’s Chief Executive Officer since 26 April 2013.

A graduate of one of France’s top engineering schools, prior to joining GRTgaz, Thierry Trouvé was CEO of Elengy from 2009 to 2013.

Thierry Trouvé began his career at the Ministry of Defence before taking up different posts at the Paris Transport Authority (1990) and then at the Department of Industry, Research and the Environment in the Nord-Pas de Calais region (1996). In 2000, he joined the French Energy Regulatory Commission (CRE) where he managed its electricity market and public utilities division.

In 2003, he was appointed Director of Pollution and Risk Prevention Operations, working with the French Ministry of Ecology and Sustainable Development. In 2006, he became GRTgaz’s Deputy CEO.

Pierre DUVIEUSART has been Deputy CEO since 1 September 2018.

Pierre Duvieusart began his career in 1992 as an engineer designing heat exchangers for combined cycle plants and cogeneration.

He then joined Elf Aquitaine as a Project Economist, then as Financial Controller in the Exploration and Production Division.

In 1999, he joined Entenial, the banking subsidiary of the AGF-Allianz group, where he was the "Infrastructures and Energy" manager.

He joined Gaz de France in 2001 as an M&A Project Manager, before joining the team in charge of making the company public. In 2006, he became the Manager of the Financial Division within GRDF.

Franck WINTENBERGER - Deputy CEO of GRTgaz, in charge of Finance, Purchasing and Logistics

He then joined the gas industry in 2011 where he has remained to this day.

Catherine BRUN has been General Secretary - Head of the Strategy, Public Affairs and Territories Domain since 1 September 2018.

She graduated from the National School of Statistics and Economic Administration (ENSAE) and joined the Gaz de France group in 1987.

She has held a variety of positions in the area of pricing studies in Gaz de France's Commercial Division before joining the Ile de France Region's Transport Production Division as Head of the Commercial Department.

In 1999, she introduced, the position of Marketing Manager for the Large European Accounts sector within the Gaz de France Trading Division. She became the Information Systems and Quality Manager of the Gas & LNG Global Branch in 2007.

She has also appointed the Information Systems Manager of GDF SUEZ's International Exploration and Production subsidiary on 1 January 2012.
On 1 September 2014, she was appointed as GRTgaz’s Marketing and Sales Director.

As of 1 September 2018, she also holds the position of Head of the Strategy, Public Affairs and Territories Domain.

Pierre Cotin started his career at Gaz de France’s Treasury Department in 1992. He then moved to the Gas Supply Division, in charge of negotiations with Norwegian and Dutch producers, before heading the commercial dispatching department.

In 2005 he was seconded to SPE-Luminus, which was then the #2 power producer and power and gas supplier in Belgium, where he was Corporate Director Trading & Supply.

He returned to France as Deputy CFO of GRTgaz and then participated in the creation of Elengy in early 2009. He was Chief Strategy Development and Marketing Officer for Elengy until August 2008.
Pierre Cotin has qualifications in engineering and economics.

Anne-Sophie DECAUX has been Technical Director - Head of the Industrial Performance & New Technologies Domain since 1 September, 2018.

A graduate of the Arts et Metiers Institute of Technology (ENSAM) in Paris, Anne-Sophie Decaux began her career as a project manager in gas engineering, then becomingan expert engineer working on underground storage surface installations at Gaz de France’s (GDF) Transport Department. After this, she joined GDF’s Research Department where she managed a group of researchers, before being appointed managing director of the Paris distribution network at GRDF, French gas distribution network.

In 2009, she joined GRTgaz as Deputy Director for the Seine Valley Region. In 2013, she became head of the Technical and Expertise Centre, which will become GRTgaz's Technical Department.

On 1 September, 2018, Anne-Sophie DECAUX was appointed Head of the Industrial Performance and New Technologies Domain, which includes, in addition to the Technical Department, the IT Department and RICE (Research and Innovation Centre for Energy).

Olivier EDMONT has been Chief Operating Officer since 1 September 2018.

After completing his engineering degree, Olivier Edmont joined the Gaz de France’s Transport Department in 1985. Until 1998, he held several positions in the fields of gas infrastructure exploitation and construction.

He then took responsibility for the development plan for the storage facilities and gas transmission network in France.

With the creation of GRTgaz in 2005, Olivier Edmont assumed responsibility for the development of projects for interconnections with foreign transmission networks and LNG terminals.

In 2008, he became Gas System Director, in charge of producing the gas transmission service and developing this in line with the expectations of GRTgaz customers.

On 1 September 2018, Olivier Edmont was appointed Chief Operating Officer, responsible for guaranteeing the safety, reliability and availability of gas transmission network for GRTgaz.

He's director of Transformation & Performance since 1 May 2021.

Virginie LE FOLL has been Chief Legal Officer since 1 September 2018.

Having graduated with an postgraduate diploma (DESS) in competition law, Virginie Le Foll started her professional career at Brandt as a business lawyer. In 2002, she joined the Vinci group as a private lawyer working in the field of motorway concessions.

In 2008, she continued to expand her activities at Robert Half International before joining GRTgaz in 2010 as a senior lawyer, then Head of Unit and chief legal assistant.

Sandrine Meunier holds a PhD in Chemistry from the Université Blaise Pascal (Clermont-Ferrand). She began her career in 1999 in the Gaz de France Research Department, where she held the successive positions of Gas Quality Engineer, “Biogas” Project Manager, and Head of the Procedures, Operational Safety and Maintenance Division.

In 2009, she joined GRDF as Gas Operations Delegate responsible for the operation and maintenance of the distribution network for Île-de-France Ouest. In 2013, she was appointed to the GRTgaz Technical Services Department as Active Networks and Ancillary Facilities Manager. In 2017, she took on the coordination of the Trans’HYtion project to research hydrogen development at GRTgaz and the necessary technical modifications to gas facilities. In 2018, she joined the GRTgaz IS Department as Deputy Director. In December 2019, she was appointed Director of GRTgaz’s R&D department, RICE (Research & Innovation Center for Energy).

On 1 May 2021, she replaced Olivier Edmont at the Operations Department, who moved into the role of Transformation and Performance Director.

Jean-François PLAZIAT has been Projects & Engineering Director and Head of the Projects Domain since 1 September 2018.

A graduate of the Superior National School of Advanced Techniques (ENSTA Paris) and the French Institute of Petroleum School (ENSPM), Jean-François Plaziat began his career in 1987 at Gaz de France in the Transport Production Department as a design engineer based in Nantes and then as an IT project manager based in Rouen.

In 1993, he joined Gaz de France's International Division to deal with projects in Central Europe, then the Underground Reservoirs department in 1997.

In 2011 he moved abroad to work as Maintenance Director within the Executive Commitee at Nordstream, a Russian-European consortium that builds and operates the large offshore gas pipeline in the Baltic Sea to directly supply Europe with Russian gas.

Since 2016, Jean-François Plaziat has been GRTgaz's Projects & Engineering Director, and since 1 September 2018 he has also taken on the role of Head of the Projects Domain.

Hervé Rambaud began his career at EDF GDF Services in 1982.

In 2001, Hervé Rambaud joined Gaz de France’s Transport Department, where he was Deputy Head then Head of the Staff and Social Relations Operation until 2004. From 2005, he was appointed Head of the Human Resources and Communication Operations as well as the Central Services Unit within GDF SUEZ’s Large Infrastructures Department.
In 2009, Hervé Rambaud was appointed General Secretary at the Elengy Company.
Since February 2018, Hervé Rambaud has been a member of the Electric and Gas Industries Social Committee.

In 2009, he was appointed Secretary General at Elengy, before joining GRTgaz as Director of Human Resources in November 2013.

Since February 2018, Hervé Rambaud has been a member of the Electric and Gas Industries Social Committee.