The role of hydrogen transport and storage infrastructure

An opportunity for industrial competitiveness 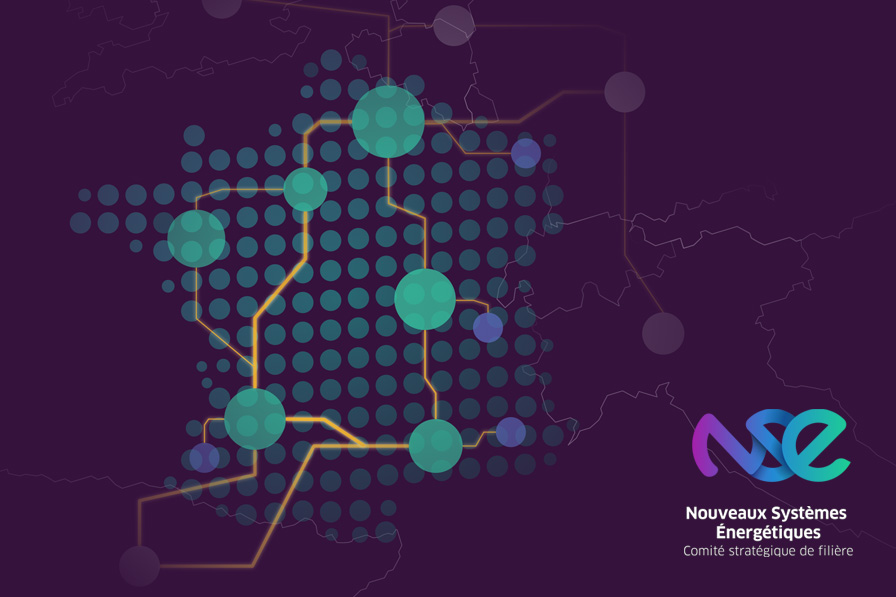 Through an integrated whole-system model of the French energy system, the study compares the competitiveness of the cost of hydrogen delivered, investments required, and security of supply in different infrastructure configurations and under a range of hydrogen demand volumes in 2030 and beyond. The study sheds light on how hydrogen infrastructure can support and facilitate the French hydrogen strategy.

This techno-economic study indicates the emergence of a progressive, demand-dependent development path for hydrogen transport and storage infrastructure, capable of reducing the cost of hydrogen delivered to the consumer by optimising investment costs across the entire hydrogen and electricity value chains covering production, transport and storage.

Hydrogen infrastructure linking industrial clusters would reduce cumulative investment costs by 9% in 2030, or 300 million euros, and by 19% by 2040, or 3 billion euros.

These dedicated infrastructures are therefore an essential asset given that demand for hydrogen develops in accordance with the French strategy, which envisages renewable and low-carbon hydrogen to reach 670 kt per year by 2030 in France1. Sensitivity analysis reveals that the same trends manifest for an even more ambitious vision as promoted by the French industry2.

Implementing a dedicated infrastructure needed to create and maintain a liquid interconnected hydrogen market, connecting French infrastructure with the main hydrogen ecosystems in Germany, Belgium, and Spain, would require additional investment costs of around €3.9 billion by 2030 (670 kt/year) and €1.6 billion by 2040. These additional investments must be assessed in the light of the hydrogen consumption and production trajectories of France’s neighbours.

The results of this study show the emergence of an optimal, progressive deployment trajectory for hydrogen infrastructure. It starts in and between industrial clusters by 2030, before interconnecting with neighbouring countries in the longer term. Considering the long deployment timelines for hydrogen pipelines and underground storage, optimisation of investment decisions will be greatly facilitated by developing—starting today—a shared vision of the future infrastructure and the associated planning to get there, based on the model of 10-year network development planning currently in place for electricity and gas.

1 22 TWh per year assuming hydrogen’s lower calorific value.
2 The "Ambition+ 2030" scenario of France Hydrogène forecasts a renewable and low-carbon hydrogen demand of 1090 kt, or 36 TWh at ICP, per year in 2030. https://www.afhypac.org/documentation/publications/

By providing access to competitive hydrogen and by improving security of supply, hydrogen infrastructure can improve the competitiveness and attractiveness of French territories for industry. In addition, by pooling supply sources and enabling utilisation of large-scale underground storage facilities, it can enhance overall energy system resiliency and help to assert national energy sovereignty. Dedicated hydrogen storage facilities can play a dual role by providing both short-term flexibility for firming renewable energy generation profiles and strategic reserves to absorb extended periods of low renewable production.

By facilitating the rapid expansion of electrolysis-based hydrogen production projects, hydrogen infrastructure can also contribute to the development of a competitive French electrolysis sector as desired by the French hydrogen strategy and as reaffirmed by President Macron in the framework of the France 2030 plan.

Following these initial results, the CSF NSE plans to deepen the analysis by involving industrial consumers identified around the French clusters as well as the electricity transmission system operator. This could enable integration of the subject of energy infrastructures within the implementation of the national hydrogen strategy, and even into the revision of the Multiannual Energy Programme (“Programmation Pluriannuelle de l’Énergie”) and the National Low Carbon Strategy  (“Stratégie Nationale Bas-Carbone”).

"The project we are developing at the Dunkirk site aims to implement a Direct Reduced Iron (DRI) steel production process using hydrogen, with a capacity of 2 million tons, and emitting three times less CO2 than a blast furnace. Considerable quantities of hydrogen will be needed, several hundred kt/year in the long term, which will have to be supplied to us in a secure and stable way, at a competitive cost. This is why the development of national supply infrastructures and international interconnections is absolutely vital to achieve this", says Eric NIEDZIELA, President of ArcelorMittal France and Vice President Climate Action ArcelorMittal Europe.

Jean-Baptiste CHOIMET, CEO of Elogen, adds: "The network and storage infrastructures will be a key element in the structuring of the hydrogen industry and will contribute to improving its competitiveness. Elogen's PEM electrolyzers are the result of powerful R&D focused on performance improvement and will actively participate in their development in France and more globally on the European territory."