How can we improve the way we monitor, protect and control the gas transmission network? Four innovative companies have responded to four major future challenges launched by GRTgaz as part of the Open Innovation Factory 2020. Hooray! Three of them are French! Presentation. 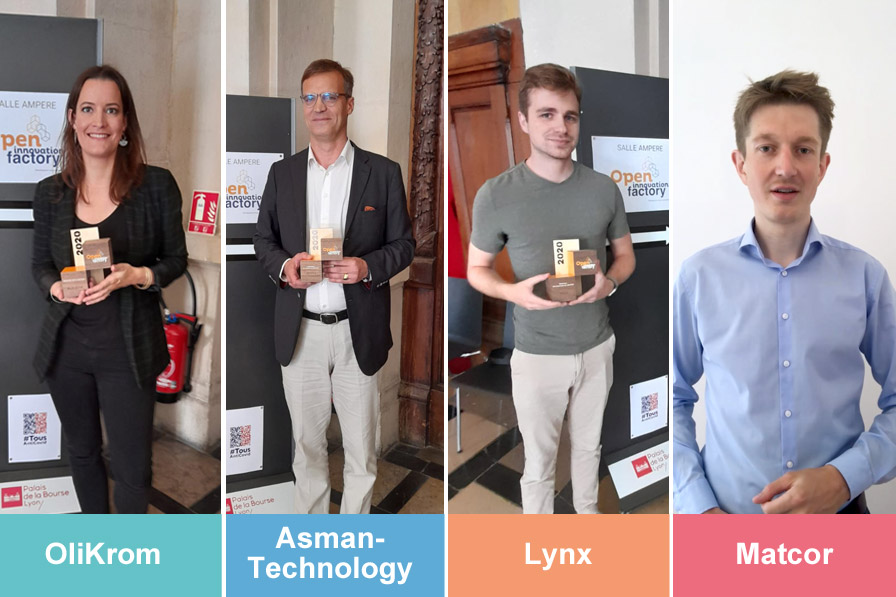 Call for Projects No. 1

How to enable the detection of overhead pipeline corrosion using “smart” coatings?

Currently, pipeline faults such as corrosion are detected via a meticulous inspection process performed by GRTgaz operatives in the field. The majority of pipelines are buried, although the network has some overhead pipelines. These are coated with anti-corrosive paint. GRTgaz wants to introduce “smart” particles that can detect this type of natural degradation.

The winner: OliKrom and its “smart” pigments

OliKrom is a startup founded in 2014 by Jean-François Létard, Research Director of the French National Centre for Scientific Research (CNRS). It specialises in smart paints for industrial companies, creating pigments that can change colour according to the temperature, light, pressure, the presence of chemical products, or changes in luminescence.

Ahmed Fakhry (research engineer, Pipeline department, RICE): OliKrom convinced our jury of experts both with its clarity and with the relevance of its proposals. These are experts in the field of smart pigments, and we are looking for a solution that can change colour when corrosion appears. This solution, and not least due to its innovative aspect, seemed the most well suited to the task while addressing the concept in detail. OliKrom also has significant experience in this area.

Ahmed Fakhry: It allows operators to note the beginnings of corrosion on overhead facilities due to changes in the colour or the state of luminescence. Also, certain facilities are very difficult to access. The solution will therefore pave the way for innovation in inspections. This will lower the costs associated with repairs and pipeline rehabilitation.

OliKrom: This type of coating still doesn’t exist! We are going to use our unique expertise to identify a technical solution that will detect the earliest signs of corrosion. Our research work will be carried out in stages: identifying one or more technologies, customising these to the sensitivity thresholds set by GRTgaz, then integrating the technology into a paint. Once the feasibility has been confirmed, there will be an industrialisation process to scale up, as well as pilot site testing and quality certification.

Call for Projects No.2

How to detect any gas leaks on the network remotely?

GRTgaz regularly monitors all 32,500 km of its network to identify any risk situations, in particular those linked to third-party works. As part of this, changes in the French Decree on multi-fluids mean that from July 2021 GRTgaz has to supplement its monitoring methods with an annual inspection to check the network for gas leaks.

The winner: Asman Technology, the eye in the sky

Asman Technology is a startup based in Nouvelle-Aquitaine. It was created in 2016 by Eric Matysiak using expertise acquired over 20 years working in broadcast and onboard electronics both for the French armed forces and for civil applications. The startup offers turnkey solutions in the fields of overhead monitoring, inspection and observation, using a “multi-sensor, multi-carrier” system. Thanks to its partnership with Innovidea, its sensors expertise allows it to offer especially accurate systems for detecting, locating and quantifying gas leaks.

Michel Pinet (DT): The Call to Projects aimed to help GRTgaz explore techniques for the new Systematic Leak Checking  (RSF) operation on the transmission network. The pipelines in question are around 11,000 km long, 90% of which can be overflown at low altitude. Asman Technology’s proposal to develop “off the shelf” state-of-the-art technologies and sensors on a global level, then selecting the best options for integration into a light aircraft, was highly relevant.

Michel Pinet: To respond to the new monitoring requirement, we are going to use a detection method employed by other European gas transporters – namely, a helicopter-mounted laser sensor. However, this entails restrictive flying conditions (altitude between 60-100 m and a 50 km/h speed limit). Using an aeroplane or ultralight, as proposed by Asman Technology, will be cheaper to operate in the short term and less polluting than a helicopter. The solution will also mean performance gains for GRTgaz.

Asman Technology: Doing away with the helicopter meant identifying sensors able to detect gas leaks both at greater linear speed and at higher altitude. For this project, we chose a ULM-class light aircraft weighing less than 600 kg. This avoided any excess costs linked to integrating mission electronics into a so-called “certified” aeroplane and, here once again, optimising the cost per kilometre overflown. At the same time, a study allowed us to retain ten products for their maturity, their performance, and their compatibility. Three different technologies are involved: hyper-spectral imaging, infra-red camera, and laser spectrometry. Testing is planned for September 2021.

Call for Projects No.3

How to make simulated safety exercises for our gas facilities more realistic?

Every year, GRTgaz operatives carry out safety exercises to test the planned response in the event of a crisis in our compressor stations. However, it is difficult to achieve a satisfactory level of realism, in particular for simulations involving fire, noise and the effects of heat.

The winner: Lynx and its augmented reality headset

Lynx is a French high-tech company behind a latest-generation augmented reality headset. A team of 15 engineers led by Stan Larroque worked to solve optical, electronic, mechanical and ergonomic challenges to bring users the state-of-the-art in virtual and augmented reality.

Dominique Richard (Senior Operations Manager, Taisnières-sur-Hon station, Compression Department of the North-east Operations Division): We were impressed with the ultra-realism of the scenario that Lynx created and by how easy the proposed solution is to use, despite being highly technical. You only need one headset, one screen, and a custom-prepared burst pipeline scenario. Lynx can produce exactly what we need to experience: a flame of pre-determined height a loud noise caused by the escaping gas. The sensation of heat could even be added at a later date.

Dominique Richard: The French state, via the Regional Directorate of the Environment, Land Planning and Housing (DREAL) recommend that we carry out exercises once per year. We wanted both GRTgaz operators and external emergency service providers to have a better understanding of the effects of a burst gas pipe. So we needed to create more realism. This headset also gives a spatial understanding of the impact, as we tend to forget the approach distances during simulations in the field. This could be an attractive solution for all gas operators.

Lynx: The headset that we are developing has the unique capacity to project 3D virtual elements embedded in your field of vision in augmented reality, with extraordinary realism. For two years, we worked with the best teams in the world (Qualcomm, Nvidia) to come up with a mixed reality solution that shows you these illusions with no perceived latency, in strong colours, and above all with a field of vision that is comfortable and clear. Learning with our technology is the most effective way to increase productivity, reduce error rates, and guarantee the safety of operations in highly demanding professional environments, such as those of GRTgaz.

Call for Projects No.4

How to manage the effects of alternating currents on our network?

Proximity between high voltage structures and metal pipelines is an increasingly frequent occurrence. In some cases, this can generate electromagnetic phenomena that are dangerous for staff, buried pipelines and their connected equipment, in particular cathodic protection. The resultant voltage can create a flow of alternating currents that is harmful to the facilities. 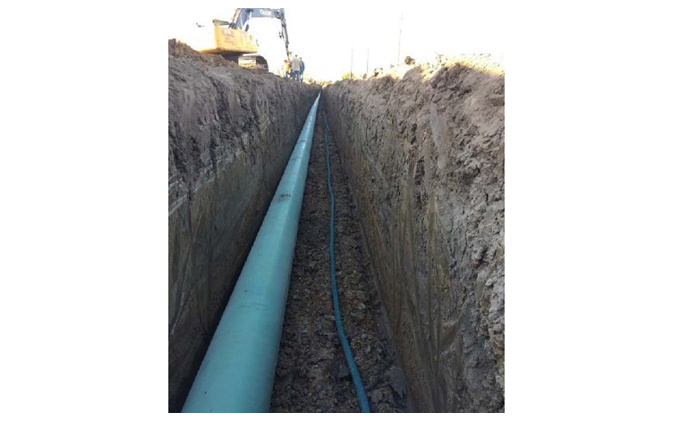 Matcor is an American company founded in 1975 and part of the BrandSafway group. It develops anti-corrosion services and solutions for the energy (oil, gas, electricity) and water sectors. Matcor presents itself as a turnkey provider of customized cathodic protection systems, as well as engineering and maintenance solutions. Its production site is located in Chalfont, Pennsylvania.

Natalia Cabrero (Head of the GRTgaz Cathodic Protection team, Marne-la-Vallée): It was a collective decision taken by a multi-disciplinary jury. Distinguishing criteria included the suitability of the solution to the business need, its financial features, and the characteristics of the company chosen to implement it – their motivation, open-mindedness and dynamism. Matcor received the highest score.

Natalia Cabrero: This efficient technical-economic solution will reduce the impact of alternating currents produced by the electric transmission network. It will also establish business relations with an overseas company. We want to innovate, invent more modern ways of working, while improving performance and lowering costs.

Matcor: Our company had already worked on installing a bare copper conductor as an earthing cable on a pipeline. The specifications required that the copper cable was installed in a special backfill. We have manufactured an anode system for many years. By using the same technology, we were able to create a technical earthing cable made of a bare copper conductor wrapped in a filled textile cover for the earthing backfill. This solution outperforms the bare copper or zinc ribbon for alternating current reduction applications.